“Oklahoma City” explores the intertwined narratives of the worst domestic terrorist attack in the U.S. and the anti-government movement that inspired the actions of Timothy McVeigh, including two standoffs with law enforcement with tragic outcomes — Ruby Ridge and the Branch Davidian compound in Waco, Texas. On April 19, 1995, McVeigh, a former soldier deeply influenced by the literature and ideas of the radical right, set off a truck bomb that destroyed the Alfred P. Murrah Federal Building, killing 168 people and injuring 675 others. Drawing upon a rich news archive of the events, including more than 60 hours of audio from jailhouse interviews with McVeigh, “Oklahoma City” traces the events that led McVeigh to that day and recounts the stories of survivors, first responders, U.S. Marshals, FBI investigators and journalists who covered the attack. The film also provides an in-depth and provocative exploration of the extremist anti-government movement that rose to prominence in the 1990s and still makes news today. Written and directed by Barak Goodman and executive produced by Mark Samels, the film will premiere at the 2017 Sundance Film Festival followed by a limited theatrical release. “Oklahoma City” premieres on American Experience on Tuesday, February 7, 2017, 8 pm. CT on OETA-HD.

“At the time of the bombing, many believed that foreign terrorists were responsible for this devastating act,” said American Experience Executive Producer Mark Samels. “When Timothy McVeigh was arrested it was a shock to realize that the United States had enemies within our own borders. ‘Oklahoma City’ delves into the roots of McVeigh’s anti-government beliefs and how those beliefs were shaped by events at Ruby Ridge and Waco.”

“Oklahoma City” begins in the 1980s, when a small number of far-right extremist groups began to organize. These groups — notably Aryan Nations and its paramilitary spinoff, The Order — perpetrated a series of violent crimes including bank robberies, bombings and murders, alerting the FBI to a rising threat and contributing to a psychology of conspiracy and confrontation on both sides.

In the mid-1980s, Randy Weaver and his family left Iowa for a mountaintop cabin in Idaho, motivated by their religious beliefs in a coming apocalypse. There, they began attending annual summer congresses of the white-supremacist group Aryan Nations, which, unbeknownst to the Weavers, was under FBI surveillance. Identifying Weaver as a potential informant, federal law enforcement officers entrapped Weaver in an undercover sting operation. Unwilling to cooperate, and misinformed that losing at trial would result in the forfeiture of his home, Weaver and his family retreated to their remote cabin fortified with guns and ammunition. What followed was one of the strangest standoffs in American history, leading eventually to the slaying of U.S. Marshal William Degan, as well as Weaver’s wife, Vicki, and 14-year-old son Sam.

Just six-months later, another standoff — between the FBI and the Branch Davidians, an apocalyptic Christian cult — transfixed the nation for 51 days. Following a violent raid by agents of the Bureau of Alcohol, Tobacco and Firearms, which resulted in deaths on both sides, the heavily armed Davidians, under their charismatic leader David Koresh, hunkered down in their compound outside Waco, Texas. After weeks of fruitless negotiations, FBI tanks finally inserted tear gas into the compound, triggering the self-immolation of scores of Davidians, including approximately 18 children.

Taken together, Ruby Ridge and Waco provided proof for many that the federal government was out of control and bent on disarming and subjugating the American people. One of the most ardent believers of this conspiratorial worldview was Timothy McVeigh.

Born in Pendleton, New York, McVeigh learned about guns and shooting from his grandfather. A skinny teenager, “Noodle McVeigh” was teased in high school, inspiring a lifelong hatred of bullies. Following graduation, he enlisted in the Army, and while serving in Iraq during the first Gulf War became disillusioned with both the military and the U.S. government. As a sharpshooter, he shot and killed Iraqi soldiers but felt he’d been given inadequate reason for doing so. The Iraqis “were human beings at the core and no different than me,” he said. “Then I had to reconcile that with the fact that, well, I killed them.”

Summoned from Iraq by the Army to attend Ranger School, McVeigh was dismissed because he wasn’t in top physical condition. Returning to Pendleton, he had difficulty finding a job, becoming further isolated and disillusioned. He was deeply influenced by reading The Turner Diaries, a 1978 novel by neo-Nazi leader William Pierce, which depicted a violent revolution to overthrow the federal government, including scenes of a truck bomb blowing up FBI headquarters, killing hundreds of people.

McVeigh embarked on an odyssey across the country, attending gun shows, meeting white supremacists and immersing himself in far-right literature. He showed up during the Waco standoff, and was enraged by what he viewed as a government massacre. A few months later, the passage of the Brady Bill, which mandated federal background checks and a waiting period for gun purchases, accelerated the growth of the anti-government militia movement. Galvanized, McVeigh began to put in motion his plan to “punish” the federal government by bombing the Murrah Federal Building in Oklahoma City.

Woven through the narrative of McVeigh’s radicalization is the story of the immediate aftermath of the bombing itself, told though the recollections of survivors. In the minutes and hours after the explosion, first responders poured into the ruins, pulling the wounded and dead from the rubble. At the same time, investigators launched the largest manhunt in American history, involving hundreds of agents and thousands of leads. Within three days, McVeigh had been captured.


“Oklahoma City” ends with the trial, conviction and execution of Timothy McVeigh. Hoping to trigger a second American Revolution against an oppressive government, McVeigh instead humanized the ordinary men and women, fathers and mothers, brothers and sisters, who make up the federal government.

“At its heart, ‘Oklahoma City’ is about the dangers of conspiracy thinking — of each side demonizing and exaggerating the threat posed by the other,” said director Barak Goodman. “In this way, it is an extremely timely and relevant cautionary tale for our own times.”

“Oklahoma City” will be available on DVD from PBS Distribution and can be purchased at ShopPBS.org. Online viewing begins February 8 at PBS.org.

Janet Beck, a survivor of the bombing, worked at the Social Security Administration office in the Murrah Building.

Jim Botting was an FBI negotiator at Ruby Ridge and at the 1993 siege at Waco, Texas. He was also on the FBI SWAT team that raided the Whidbey Island cabin of Robert J. Matthews, leader of The Order, a white supremacist group.

Bill Buford was an ATF team leader who was shot three times when he entered the Branch Davidian compound at Waco during the initial raid.

Ben Fenwick is a journalist who covered the Oklahoma City bombing trial.

Jerry Flowers was a detective and hostage negotiator for the Oklahoma City Police at the time of the bombing.

Claudia and Jim Denny are the parents of siblings who survived the bombing.

Helen Garrett’s son Tevin was in the daycare center in the Murrah Building and killed in the bombing.

Lee Hancock, a former reporter for The Dallas Morning News, covered the Branch Davidian standoff from the first day of the siege on February 28, 1993, until the fire on April 19, 1993. She also covered the Oklahoma City bombing.

Dan Herbeck is an investigative reporter who has been at The Buffalo News for nearly 40 years. He is the coauthor (with Lou Michel) of American Terrorist: Timothy McVeigh and the Oklahoma City Bombing.

Jon Hersley was the lead FBI investigator for the Oklahoma City bombing.

Jeff Jamar was an FBI negotiator and Special Agent in Charge at the Waco siege.

Daniel Levitas is an attorney and expert on the radical right. He is the author of The Terrorist Next Door: The Militia Movement and the Radical Right.

Wayne Manis served for more than 28 years in the FBI and has been involved in undercover investigations of groups including the Weather Underground, the Ku Klux Klan, and the white supremacist groups known as the Aryan Nations and The Order.

Lou Michel is the main crime reporter for The Buffalo News and coauthor (with Dan Herbeck) of American Terrorist: Timothy McVeigh and the Oklahoma City Bombing.

Bill Morlin is a journalist who worked for more than three decades at TheSpokane Chronicle and The Spokesman-Review. He was the first to report Randy Weaver’s self-imposed “house arrest” and the first on the scene at the shootout at the “Y,” which led to the siege at Ruby Ridge.

Kerry Noble is a former member of the CSA, an extremist paramilitary group with close ties to the Aryan Nations.

Randy Norfleet, a captain in the Marines serving at the USMC Recruiting Station in the Murrah Building, saw Timothy McVeigh leaving the Ryder rental truck on the day of the bombing.

Mark Potok, a Senior Fellow at the Southern Poverty Law Center in Montgomery, Alabama, is one of the country’s leading experts on extremism. Before joining the SPLC in 1997, he was a journalist at several newspapers including USA Today, the Dallas Times Herald and the Miami Herald. While at USA Today he covered the 1993 Waco siege, the rise of militias, the 1995 Oklahoma City bombing and the trial of Timothy McVeigh.

Bob Ricks, FBI Special Agent in Charge, Waco and Oklahoma City, is currently the Chief of Police in Edmond, Oklahoma.

Jennifer Rodgers, a police officer in Oklahoma City, received the Oklahoma Police Medal of Valor for her actions on the day of the bombing.

Byron Sage was an FBI negotiator during the standoff at the Branch Davidian compound in Waco.

Kat Schroeder is a former Branch Davidian who left the compound to be with her kids and subsequently went to jail.

Ruth Schwab was working at the U.S. Department of Housing and Urban Development in the Murrah Building on the day of the bombing.

Jess Walter is the author of Ruby Ridge: The Truth & Tragedy of the Randy Weaver Family. At the time of the events at Ruby Ridge he was a reporter for The Spokesman Review in Spokane, Washington.

Stuart A. Wright is professor and chair, Department of Sociology, Social Work & Criminal Justice at Lamar University in Beaumont, Texas. He is the author of several books, including Patriots, Politics and the Oklahoma City Bombing and Armageddon in Waco: Critical Perspectives on the Branch Davidian Conflict.

Leonard Zeskind is president of the Institute for Research & Education on Human Rights and the author of Blood and Politics: The History of the White Nationalist Movement from the Margins to the Mainstream. 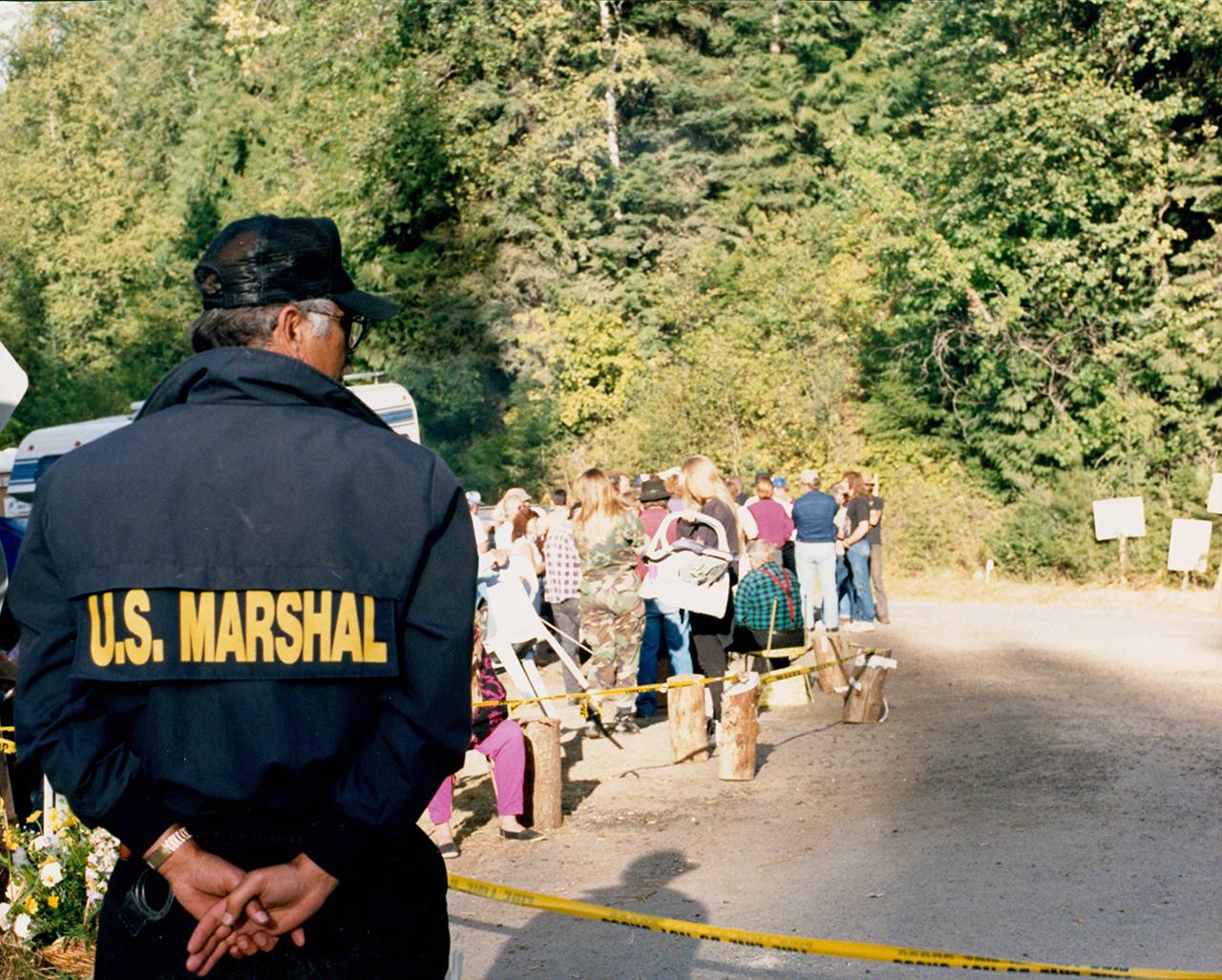