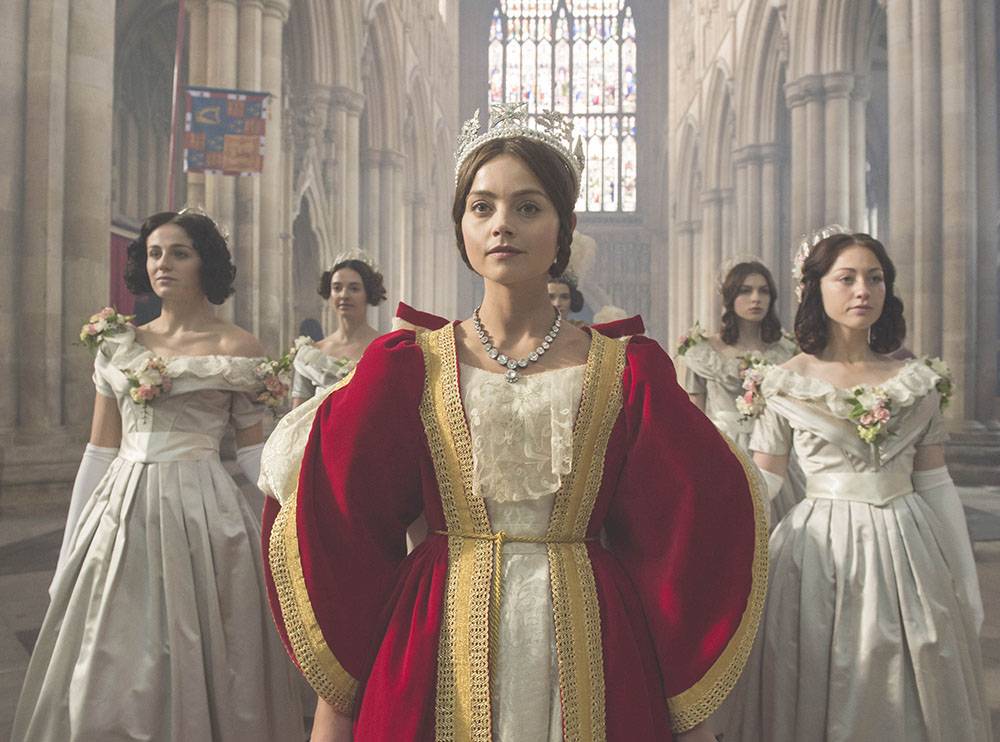 Jenna Coleman (Doctor Who) stars as the young Queen Victoria at the outset of her epic reign, which set the stage for an entire era that would be named in her honor. Scripted by bestselling novelist Daisy Goodwin (The Fortune Hunter), Victoria airs in eight magnificent parts, fit for a queen, on MASTERPIECE, starting January 15, 2017 at 8 p.m. on OETA.

Following Victoria from her accession to the throne at age 18, through her education in politics, courtship and marriage, Victoria paints a portrait of a monarch who was raised to be the pawn of her powerful elders but who wasted no time in showing the empire who was in charge.

The stellar cast includes Rufus Sewell (The Man in the High Castle) as Lord Melbourne, the British prime minister who was Victoria’s father figure and intimate friend; Tom Hughes (Dancing on the Edge) as the handsome, brilliant and awkward Prince Albert, who stole Victoria’s heart after a rocky start; and Alex Jennings (Churchill’s Secret) as Leopold I, King of Belgium, Victoria and Albert’s matchmaking uncle who had dreams of a dynasty for his obscure royal line—which he amazingly achieved.

Paul Rhys (Borgia) plays Sir John Conroy, the rumored lover of Victoria’s mother, the Duchess of Kent, a German princess played by German actress Catherine H. Flemming. Conroy pictures himself as the de facto ruler of the realm—if only he can get the duchess appointed regent for the immature queen. And Peter Firth (South Riding) appears as Victoria’s conniving uncle, the Duke of Cumberland, who is convinced that he rightfully belongs on the throne and diligently conspires to get there.

In Victoria, writer Daisy Goodwin imaginatively depicts what it was like for an ill-educated, emotionally deprived teenager to wake up one morning and find that she is the most powerful woman in the world.

That it happened at all was practically a miracle. Victoria was queen only by virtue of ill luck and unfruitful marriages on the part of her uncles, who failed to produce legitimate heirs to the crown. Furthermore, her immediate predecessors were so disliked as kings that the institution of the monarchy seemed to be doomed. Victoria charts how the new ruler rose to the challenge and weathered a series of crises—some of her own making—without ever losing her youthful charm and innate sense of justice, which made her popular with her subjects.

Goodwin has been careful to stay faithful to the facts, while reading between the lines to fill in the gaps where the early Victorians were scrupulously silent. The result is a gripping historical pageant that reveals a side of Victoria that is at odds with her later reputation for prudery and a high moral tone. In other words, Victoria was not a Victorian as we use the term.

Victoria’s name is another case of our inheriting the wrong idea. There were so many Victorias named in tribute to the queen, during and after her reign, that it comes as a surprise to learn that when she was christened Alexandrina Victoria at her birth, both names were practically made up. Previous British queens were Jane, Mary, Elizabeth, or Anne.

The regnal name by which a king or queen is to be officially known is up to the sovereign. In choosing to be called Queen Victoria, could she have been signaling that she would be a queen like no other?