Steven Johnson - How We Got To Now

Steven Johnson - How We Got To Now 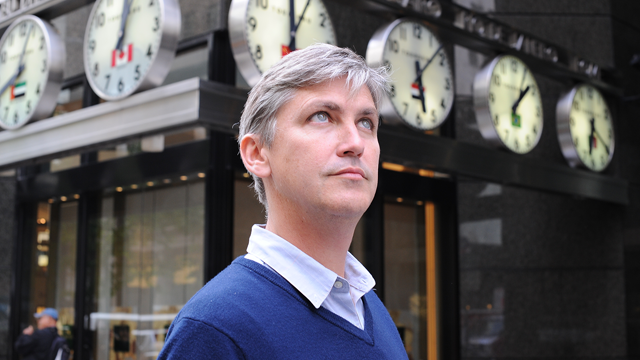 Steven Johnson is the executive producer and host of “How We Got to Now,” a new series airing Wednesdays at 9pm on OETA exploring six innovations that made the modern world possible. He also wrote a companion book of the same title. We asked him six questions about the series:

Being from Oklahoma, where summer temperatures frequently climb over 100 degrees, the episode and chapter on COLD, detailing the innovations leading up to the widespread adoption of indoor air conditioning, was of special interest. I was surprised to learn that the first refrigeration technology, developed by a Florida physician for medical use in 1842, was a flop and didn’t catch on for decades. Do you see any recent failed or under-utilized technologies making a comeback in the future?

We are seeing a failed technology beginning to make a dramatic comeback in the form of electric vehicles, starting with the success of the Tesla Model S over the past year or two. Electric cars have been on the radar in one form another since the beginning of the automobile, but the battery technology simply hasn't been what it needed to be to compete with internal combustion engines. But that is finally changing, and I think it going to change very quickly. I wouldn't at all be surprised if the majority of new cars were 100% electric within the next decade.

You write that “ideas are networks of other ideas”. Are you concerned that new ideas are overly restricted and no longer finding their way into the ether of innovation?

We do have a problem with intellectual property law right now, where there are too many institutions that have been built up trying to enforce what are often dubious patent claims, or these massive legal battles between companies like Google and Apple that are just a colossal waste of resources. But we also live in a wonderfully connected time, where ideas can travel at the speed of light all around the world. So I think we are probably going to be fine where innovation is concerned in the long run.

You tell the story of how Thomas Edison intended the phonograph to be used for recording voice messages to be sent through the mail to family/friends while Alexander Graham Bell envisioned the telephone to be a portal for listening to live music events. In reality, the uses were reversed: communication with friends was done over the phone and records used for listening to music. Do we still have the ability as consumers to decide how we use technology or has the increasing effective use of marketing locked-in the intended uses?

Actually, I think we have *more* power to shape our technology, not less. Look at Twitter: it was designed as a simple tool just to let your friends know what you were having for breakfast, and it ended up being instrumental in supporting political protest movements all over the world. Occupy Wall Street was a hashtag on Twitter for three months before people actually decided to occupy Wall Street. Media and tech are now so much more participatory, so much more about creating your own experience than passively consuming someone else's. That has to open up the field for new uses that were not envisioned by the original inventors.

The series and book cover six innovations (glass, cold, sound, clean, time and light) that explore how we got to now. Were there other innovations that you considered during development that ultimately didn’t make the cut?

Quite a few! We looked at money, skyscrapers, illusion, electricity, and several others. But who knows -- maybe we'll get to do another season and pick up some of those themes next time around!

The story of Ada Lovelace and Charles Babbage (the world’s first computer programmers from the 1840s) seems almost unbelievable. It’s a little heartbreaking that these two visionaries conceptualized ideas that would be impossible to realize for another century. But do you think they created a foundation for the development of computing? Do today’s visionary physicists/futurists who may not live to see the realization of their work serve a similar function for the innovators of tomorrow?

Yes, certainly. But of course it's almost impossible to know who they are. The most visionary ones are often ignored during their lifetimes, so you and I never hear about them. But their work is less likely to disappear the way Babbage and Lovelace's disappeared -- most of the insights they came up with had to be independently rediscovered a hundred years later. That's less likely to happen in the age of Google.

Finally, you’re a dead ringer for Downton Abbey’s Cousin Matthew, Dan Stevens. Since he left the show and you have an ‘in’ with PBS, would you consider joining the show? (It might require a fake British accent).

It was *very* odd watching that show; he looked more like me than just about any other person (actor or not) that I've ever met. Making matters stranger, we also both now live most of the year in Brooklyn. But he's now dropped like thirty pounds and is sporting a full beard, which I am incapable of growing. So I think no one will mistake us on the street any more.