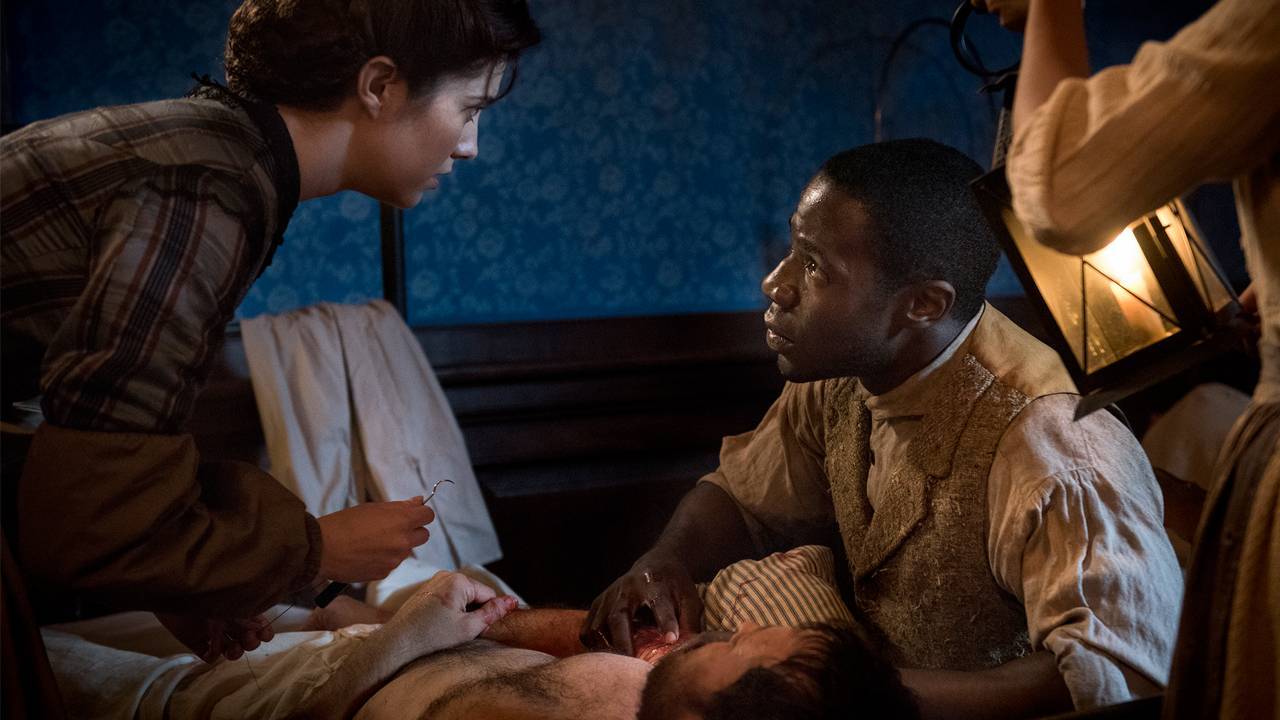 PBS announced today that it has given the greenlight to a second season of MERCY STREET, PBS’ first original drama in more than a decade. The first season, executive produced by Ridley Scott (The Martian, Gladiator, Thelma and Louise); David W. Zucker (“The Good Wife” and “The Man in the High Castle”) of Scott Free; Lisa Q. Wolfinger (“Desperate Crossing, The untold story of the Mayflower”) and David Zabel (“ER”), drew a 3.85 rating (Nielsen Live + 7) for the January 17 premiere, reaching more than 5.7 million viewers (persons 2+). The series’ six episodes have streamed 2 million times (from January 14-February 28) across all platforms, including PBS station websites, PBS.org and PBS apps for iOS, Android, FireTV, ROKU, Apple TV, Xbox 360 and Windows 10.

MERCY STREET trended nationally on Twitter for more than two hours on its January 17 premiere and was the #2 most social broadcast drama on TV that night (Source: Nielsen, 1/17/16, ranked on unique authors/tweets/impressions). The series also trended nationally during its third and sixth episodes. The MERCY STREETwebsite has had more than 600,000 unique visitors since its launch (December 21, 2015-February 28). The site is dedicated to connecting fans to the real history behind the drama. Visitors can create tintype-style photos, read about the real life events that inspired each episode, flip through historical photographs and take a quiz on Civil War medicine.

MERCY STREET’s first season took place in the spring of 1862 in Alexandria, Virginia, a border town between North and South and the longest-occupied Confederate city of the war. Ruled under martial law, Alexandria was the central melting pot of the region, filled with civilians, female volunteers, doctors, wounded soldiers from both sides, free blacks, enslaved and contraband (escaped slaves living behind Union lines) African Americans, prostitutes, speculators and spies. MERCY STREET follows the lives of all of these characters, who collide at Mansion House, the Green family’s luxury hotel, which has been taken over and transformed into a Union Army hospital.

Season two picks up directly from the dramatic events at the end of the season one finale, continuing to explore the growing chaos within Alexandria, the complicated interpersonal dynamics of Dr. Foster, Nurse Mary and the Mansion House staff, the increasingly precarious position of the Green family and the changing predicament of the burgeoning black population. The season will introduce a number of new elements, taking us closer to the fight and into the halls of Confederate power, all set against the intensifying war, starting with the Seven Days’ Battle and culminating with Antietam.

“It has been a privilege for all of us on MERCY STREET to be able to tell these stories at the intersection of drama and history, and we are thrilled to have the opportunity to build on what we’ve already done,” said co-creator and executive producer David Zabel. “The quality entertainment and educational value that MERCY STREET provides have made the show a perfect fit for PBS, and we’re elated that the first season has resonated with its audience.”

“The success of season one of MERCY STREET proves how captivating this series is and how viewers have identified and connected with the characters’ lives, even during a much different time in our nation’s history” said executive producer David W. Zucker. “We are looking forward to continuing to expand on these important themes with the next season.”

“Several years ago, I went searching for a fresh take on the Civil War and stumbled on the world of Union-occupied Alexandria, Virginia,” said co-creator and executive producer Lisa Q. Wolfinger. “The history inspired us to create a complex ensemble drama about life on the home front told from multiple points of view: women, African Americans, doctors and civilians. This wasn’t easy or glamorous history; it wasn’t about battles and glory; this was challenging material rife with provocative themes and fully three-dimensional and often flawed characters. In so many ways, PBS was the perfect fit for us. The fact that MERCY STREET has been so well-received by PBS’ audiences is exhilarating. We are looking forward to season two and the opportunity to expand our storylines while digging deeper into this pivotal time in American history.”

“I am so pleased that MERCY STREET has already had such tremendous success and will be returning to Virginia to film season two,” said Governor Terry McAuliffe. “This outstanding show is a great illustration of the enormous opportunities Virginia offers to film and television producers and to tourists who enjoy history and natural beauty. I hope everyone will continue to supportMERCY STREET and take advantage of our many exceptional Civil War sites and attractions, particularly those in Alexandria, where the original story of MERCY STREET took place, and in Central Virginia where the PBS series is filmed.”

To ensure historical accuracy of the first season, the producers engaged a team of advisors headed by noted historian Dr. James M. “Jim” McPherson and including leading experts on Civil War medicine, military history, African-American history, women in the Civil War era and more. McPherson will return for season two along with Shauna Devine (Learning From the Wounded, the Civil War and the Rise of Medical Science), Jane Schultz (Women at the Front: Hospital Workers in Civil War America), Audrey Davis, director of the Alexandria Black History Museum, and Anya Jabour (Scarlett’s Sisters, Young Women in the Old South). New additions include James Downs, (Sick from Freedom: African American illness and suffering during the Civil War and Reconstruction) an Andrew Mellon New Directions Fellow at Harvard University; Dr. Anthony Tizzano, a member of the clinical faculty of obstetrics and gynecology at Case Western Reserve University and Cleveland Clinic’s Lerner College of Medicine; Walton Owen, ex-curator of the Fort Ward museum in Alexandria, VA; Dr. Gordon Dammann, founder of the National Museum of Civil War Medicine; and Jay Sexton, (Debtor Diplomacy; Finance and American Foreign Relations in the Civil War era.)  director of the Rothermere American Institute.

Leading up to and during the first season of MERCY STREET, PBS stations held more than 30 screening events resulting in thousands of attendees.

PBS LearningMedia introduced a special collection of Civil War-inspired videos from the PBS Digital Studios series THE GOOD STUFF. The series targets middle and high school students and teachers, with each 5-7minute show designed to correspond toMERCY STREET’s themes, while framing topics for social studies and U.S. history classrooms. So far the episodes have drawn more than 65,000 views across Digital Studios, LearningMedia and the pbs.org/mercystreet sites.

The full second season will be available on Blu-ray and DVD from PBS Distribution: ShopPBS.org; 800-PLAY-PBS, 24 hours a day, 7 days a week. The film will also be available for digital download. Season one can be purchased now.

Amazon Prime Video is the exclusive premium subscription streaming home for MERCY STREET, with each episode available to Prime members in the U.S. seven days after its broadcast on PBS stations.


About Scott Free Productions
Scott Free Productions is the film and television production company of acclaimed film director Ridley Scott.  In the 20 years since Scott Free was formed, the company has earned over 70 Emmy nominations with 20 wins, and 20 Golden Globe nominations for its highly acclaimed television projects, which include: the Peabody Award-winning “The Good Wife,” which is in its seventh and final season on CBS; a series adaptation of Philip K. Dick’s classic “The Man in the High Castle” for Amazon; the Civil War medical drama “Mercy Street,” PBS’ first scripted series in over a decade; “BrainDead” a satiric-thriller CBS summer series from Robert and Michelle King; and the acclaimed “Killing” telefilms (“Killing Kennedy” “Killing Lincoln” and “Killing Jesus”) for National Geographic, each of which premiered to record numbers for the channel.  Current productions in 2016 include: “Taboo” for FX and BBC; “Killing Reagan” for National Geographic; “The Terror” for AMC; “Sensory” for CBS; and “JCVJ” for Amazon.

Lone Wolf Media
Lone Wolf Media is an independent television production company with a longstanding reputation for developing and producing award-winning programming across a variety of genres. Founded in 1997 by Kirk and Lisa Q. Wolfinger, Lone Wolf Media has grown since then to become a leader in factual entertainment. Recent primetime specials include “D Day in HD” for History Channel and THE BOMB for PBS. Current projects include a 9/11 special about the attack on the Pentagon for PBS and a series of programs about World War 1 for Smithsonian Network. President and owner Lisa Q. Wolfinger created the new PBS American drama concept in collaboration with David Zabel, showrunner and lead writer on NBC’s hit series “ER.” MERCY STREET was inspired by the sesquicentennial of the Civil War and a shared passion for history.


About PBS
PBS, with 350 member stations, offers all Americans the opportunity to explore new ideas and new worlds through television and online content. Each month, PBS reaches more than 100 million people through television and over 33 million people online, inviting them to experience the worlds of science, history, nature and public affairs; to hear diverse viewpoints; and to take front row seats to world-class drama and performances. PBS’ broad array of programs has been consistently honored by the industry’s most coveted award competitions. Teachers of children from pre-K through 12th grade turn to PBS for digital content and services that help bring classroom lessons to life. PBS’ premier children’s TV programming and its website, pbskids.org, are parents’ and teachers’ most trusted partners in inspiring and nurturing curiosity and love of learning in children. More information about PBS is available at www.pbs.org, one of the leading dot-org websites on the Internet, or by following PBS on Twitter, Facebook or through our apps for mobile devices. Specific program information and updates for press are available at pbs.org/pressroom or by following PBS Pressroom on Twitter.