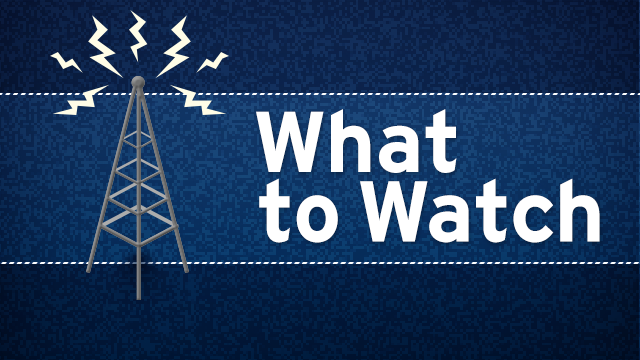 7pm                 ONR – More than 25,000 people rallied at the state capitol to send a message to legislators that education is under-funded… While legislators move to repeal Common Core State Standards for education, teachers wonder what will take their place… We go inside an “F” school in a special segment from the Tulsa World… Oklahoma legislative leaders discuss the prospects for a tax cut in this legislative session… Legal experts predict the U.S. Supreme Court decision in a case involving Oklahoma-based craft chain Hobby Lobby could have far-reaching implications… As the tornado season begins, sales of storm shelters and safe rooms are brisk, but consumers are advised to do some research before buying… In Living Well, we examine the newest developments in knee replacement surgery… We discuss news from the capitol with eCapitol News Director Shawn Ashley… And, Ted Streuli, Editor of The Journal Record, reviews the week in business

8:30pm            CHARLIE ROSE: THE WEEK -- Tonight Syracuse coach Jim Boheim looks ahead to the weekend’s Final Four line-up, and author Michael Lewis discusses his new book about Wall Street and high frequency trading.  Plus actor Brian Cranston talks about his role as LBJ in the new play All the Way; interview with Yulia Marushevska, the Ukrainian grad student who is the face of " I am a Ukrainian....” Her web video has generated over 7 million hits ; and filmmaker Maggie Betts analyzes her new short engram.

10:30pm          DOCTOR WHO “Cold War” – The Doctor and Clara land on a Soviet submarine in 1983 during the Cold War. Trivia Nugget: this is one of the episodes that was written by Mark Gatiss who played Sherlock’s brother Mycroft in the MASTERPIECE MYSTERY series “Sherlock.”

8:30am            IT’S SEW EASY – This is a new series in our sewing series rotation. Its focus is on contemporary style. Projects are easy enough for beginners but creatively challenging to pique the interest of all sewing enthusiasts.

10:30am          VICTORY GARDEN’S EDIBLE FEAST – This is a new series in our gardening timeslot from the creators of VICTORY GARDEN. It takes viewers on a journey across America to learn about fresh local foods, and the people who grow and produce them.

8:30am            THE LAND DOCTORS – This is a new, locally-produced series. For more information about topics covered in this program, go to THE LAND DOCTORS website. This series will repeat in several timeslots on OKLA. See our online schedule for those dates and times. We’ve aired all of the new episodes of AVIATORS. If new episodes are offered to us, we’ll air them.

6pm                 FATHER BROWN “The Face of Death” -- Lady Margaret runs a man down and his son Daniel blames her for doing it deliberately. When Lady Margaret is murdered, Daniel is suspected but cannot be found.

9pm                 SECRETS OF SELFRIDGES – A documentary that goes deeper into the real Harry Gordon Selfridge and how he introduced a new retail model that revolutionized the way Londoners shopped.

NEW BRITISH COMEDIES start tonight! -- Our broadcast rights for KEEPING UP APPEARANCES and AS TIME GOES BY run out on March 31st. We conducted an online survey among our members and e-newsletter subscribers and asked what British series they’d like to see replace the old ones. The two series they chose were ONE FOOT IN THE GRAVE and THE CAFÉ. More information about this change can be found here. LAST OF THE SUMMER WINE will continue to air Monday through Thursday during the 11 o’clock hour.

10pm               ONE FOOT IN THE GRAVE – Victor and Margaret return from holiday to find that their baggage has been sent to the other side of the world and their house has been demolished following a terrible fire. They attempt to cheer themselves up by holding a house warming party.

8pm                 IN PERFORMANCE AT THE WHITE HOUSE “Women of Soul” -- Aretha Franklin, Janelle Monae, Jill Scott and others perform songs by remarkable women of soul.

10pm               THE VISIONARIES “Introduction Acui, Part 2” -- The Association of College Unions International helps students contribute to the greater good. (Part 1 aired March 17. If you missed it, it's available to view online.)

7pm                 THE DAVE CLARK FIVE - GLAD ALL OVER, A GREAT PERFORMANCE SPECIAL -- The group's iconic performances on The Ed Sullivan Show and live concert footage are showcased.

10:30pm          FOUND CAUSES – An in-depth look at two different Oklahoma charities and the solutions they are providing. We also hear from the people whose lives have been changed by the generosity of others. You will witness real people telling their story in their own words.

7pm                 THE PEOPLE’S BUSINESS “State Employee Pay and Benefits” -- Viewers have the unique opportunity to ask legislators about the issues affecting them, llive and direct. Tweet your questions or comments using #peoplesbusiness or e-mail questions to peoplesbusiness@oeta.tv. To ask a question during the program, call 800/947-4529. NATURE will air at 10pm tonight. It also repeats Saturday afternoons at 2pm and Sunday mornings at 10am.

8pm                 NOVA “Inside Animal’s Minds: Bird Geniuses” -- Researchers use the science of animal cognition to learn how birds understand the world around them.

7pm                 NATIVE OKLAHOMA -- "Native Oklahoma" is a first-of-its-kind joint television project between seven Oklahoma Indian tribes. Native culture, history, song, dance and values are featured with stories submitted from the Cherokee, Choctaw, Kiowa, Osage, Ponca, Cheyenne and Arapaho tribes. It will repeat 4/15 at 9:30pm, 4/24 at 7pm and 4/27 at 11:30am.

8pm                 MIDSOMER MURDERS “The Killings at Badger’s Drift” (Part 2) – This wraps up the first murder mystery of this new series on OETA. This episode repeats on OKLA tomorrow night at 8pm.

9pm                 DOC MARTIN “Born with a Shotgun” -- Tempers are frayed as Martin and Louisa try to find ways to comfort their constantly wailing baby.

10pm               DEATH IN PARADISE “Wicked Wedding Night” -- A bride is murdered on her wedding day and Detective Inspector Richard Poole investigates the crime. This episode repeats on OKLA tomorrow night at 9pm.