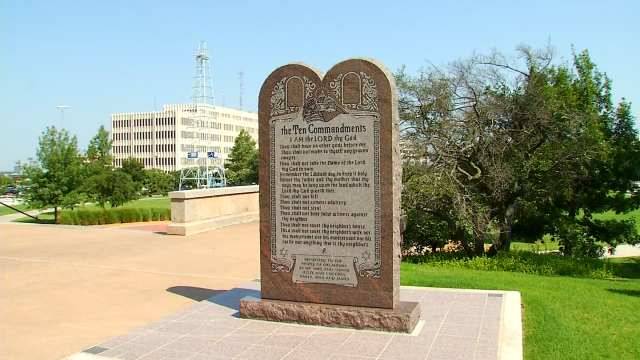 OKLAHOMA CITY (AP) - A company that built a granite Ten Commandments monument that was removed from the Oklahoma Capitol grounds under a court order said Tuesday it still hasn't been paid for its work.

Wilbert Memorials sales manager Gary Mosier said the company fronted the costs of constructing the monument after someone drove a car into the original last year.

Mosier said the second monument was built with the understanding the company would be reimbursed but that no payments have been made.

The second monument was removed Monday night after the Oklahoma Supreme Court ruled that it violated a constitutional prohibition on using state property to support a religion.

"We have not received anything on the monument to this point, and I do not know how much of anything has been raised," Mosier wrote in an email to The Associated Press.

Republican state Rep. Mike Ritze of Broken Arrow and his family paid about $10,000 for the original granite sculpture. Ritze vowed to spearhead a fundraising effort for the second monument.

While Mosier waits for payment for building the monument, Oklahoma Gov. Mary Fallin is seeking to get it back on the Capitol grounds. On Tuesday, she urged the Legislature to seek a public vote on amending the state constitution to remove the section that prohibits the use of public property to support "any sect, church, denomination or system of religion."

"My hope is that the Legislature will act quickly this legislative session ... to send this to a vote of the people and let the people of Oklahoma make the decision about whether they want a historical monument like this on the state Capitol grounds," Fallin said during a news conference in front of the monument at its new location at a conservative think tank down the street from the Capitol.

With an Oct. 12 court-ordered deadline for removing the monument looming, the state hired Wilbert Memorials to move the sculpture late Monday from a landing on the north side of the Capitol building to its new home at the Oklahoma Council of Public Affairs.

To amend the state constitution, the Legislature would need to pass a resolution through the House and Senate calling for a public vote. The proposed amendment could then be placed on the November ballot.