Steve Goldbloom Talks "Everything But the News" Season Two

Steve Goldbloom Talks "Everything But the News" Season Two 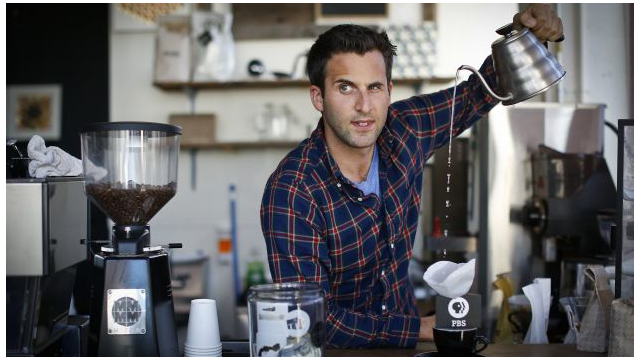 PBS Digital Series Everything But the News chronicles reporter Steve Goldbloom's misadventures as he attempts to cover the startup scene in California. We asked Steve about the new season of EBTN, the changing face of news and the truth about his 'producer' Jordan.

Congratulations on season two of Everything But the News! What kind of response did you get after ending last season under the guise of cancellation?

Thanks! EBTN has always been a slight case of art imitating life. In the beginning, we really didn't know if PBS Digital Studios was going to green-light another season, especially since this was our first production with them. That genuine anxiety gave my co-creator Noah Pink and I plenty of material to work with when outlining the narrative for the first season. By the time we realized PBS wanted to continue the relationship, all the episodes were in the can. We initially added the crowdsourcing component via Indiegogo as insurance so that if we were cancelled then we could pursue an audience powered campaign. I felt a little bad ending the way we did because there were a number of people who contacted me afterwards asking where to donate! Who knows, maybe we'll need to reconnect with them after this season.

EBTN is presented as a tongue-in-cheek documentary chronicling your efforts to produce segments for NewsHour. But along the way, you stealthily inform viewers about developments in the tech industry. Is it difficult to walk the line between parody and reporting?

I think comedy is harder than news. There's nothing worse than watching something try to be funny and fail. With news, that pressure doesn't exist. In our case, I liked toggling between the two styles. If a subject was too dry, my natural intuition is to unearth the ridiculous. I used to produce serious news segments and at times felt limited by the artificiality of the newcasters tone that says, "I am wise. This is serious. Pay attention." People don't actually talk that way and for me that's an unappealing way to learn something new. The inherent humor and discomfort in EBTN helps us present genuinely interesting topics you might otherwise overlook. The naive and flawed newscaster character also serves as a gateway to an industry, like tech, which is typically closed off to most people.

Do you see this "meta-reporting” as a new way to deliver information to a generation that’s consuming less media through traditional means such as television?

I think it helps. You see NPR doing more of this, especially through their latest breakout podcasts Serial and Startup. Both of those programs are hyper aware of their audience. The idea that we're all in this medium together, slogging our way through the world as best we can. I think revealing to the viewer upfront that you don't have all the answers and make mistakes is refreshing and becoming an increasingly popular format. Give it a few years and we'll all be nostalgic for a more formally produced tone! Isn't that how it goes?

Last season you explored dating apps, ride share start-ups, crowd-funding and fitness apps. What is on tap for the new episodes?

We are switching gears a little this year. My co-creator Noah Pink and producer Nic Pollock decided to focus less on "Steve's Narrative" and more on the companies at hand. The episodes are considerably shorter and hold up a little more as news segments. They're still plenty absurd so don't think we've gone all MacNeil/Lehrer on you just yet. Expect to see coverage on everything from companies that use facial recognition technology in online dating to an app that sells nothing but black v-necks to a lab that's spent the last seven year creating a "smart cup" technology to let us know what is readily available on the backside of a can. Fortunately for EBTN, the tech sector has continued to crank out winners to feed our appetite for satire and news.

Jordan the producer was season one’s great villain. Does he ease up this time around?

We see a little less of Jordan this time around for no other reason than we decided to focus more on the companies and less on my character's world. I should point out (spoiler alert) that Jordan is my second cousin from Canada and not tied to PBS. He did receive plenty of hate-mail after the season, which he took in good humor. Our real producer is a great guy named Matt Vree from PBS Digital Studios who is nothing like Jordan and therefore unusable to us in the show!

Steve Goldbloom is the host of Everything But the News. Find the new season and past episodes on YouTube. Steve is on Twitter at @steveeegeee