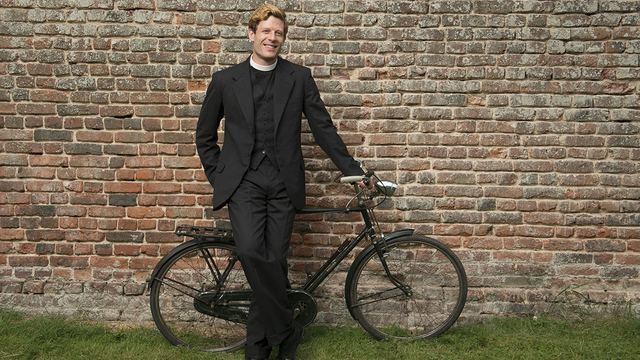 “As a priest, isn’t everything our business?” asks Reverend Sidney Chambers as he gets to the bottom of another baffling murder around the placid village of Grantchester. James Norton stars as the handsome, jazz-loving vicar, with Robson Green as his law-enforcement ally, Inspector Geordie Keating, on Grantchester, airing in six parts on MASTERPIECE, Sundays, January 18 - February 22 at 9pm on OETA.

Based on the acclaimed novel Sidney Chambers and the Shadow of Death by James Runcie, Grantchester hearkens back to a simpler England, when World War II had just ended, Elizabeth II was the new queen, the death penalty was still in force and the local vicar was the pillar of the community.

Runcie styled Sidney after his late father, Lord Runcie, who was Archbishop of Canterbury in the 1980s. Like Sidney, the elder Runcie was a war hero before he entered the ministry, and he was a compassionate and amiable parish priest. Unfortunately, he never took up crime-solving. Grantchester corrects that oversight.

The series begins with a sad but predictable suicide. Lawyer Stephen Staunton in nearby Cambridge has been drinking heavily and is deeply in debt. Late one night, he turns his old service revolver on himself, leaving behind a blood-spattered suicide note and a grieving widow. It’s an open-and-shut case, according to Geordie, who is the overworked police inspector in charge of the investigation. But people confide things in a parish priest that they never tell police—which is how Sidney comes to suspect murder. His first hurdle is to convince Geordie that there’s more to Staunton’s death than meets the eye. Fortunately, the cleric and the cop bond over their war service, their love of a good pub, and their competitive instincts—in this case, for backgammon.

It’s the start of a beautiful friendship that takes Sidney and Geordie through a series of challenging cases, revealing the dark side of early 1950s England—jealousy, prejudice, class conflict, and plain old passion. The last emotion is not exactly unknown to Sidney, who is an unusually worldly clergyman. His pursuit of love is as much a part of the story as his tireless search for justice, spiritual fulfillment, and a really hip jazz club.

Watch the producers and cast discuss the series: