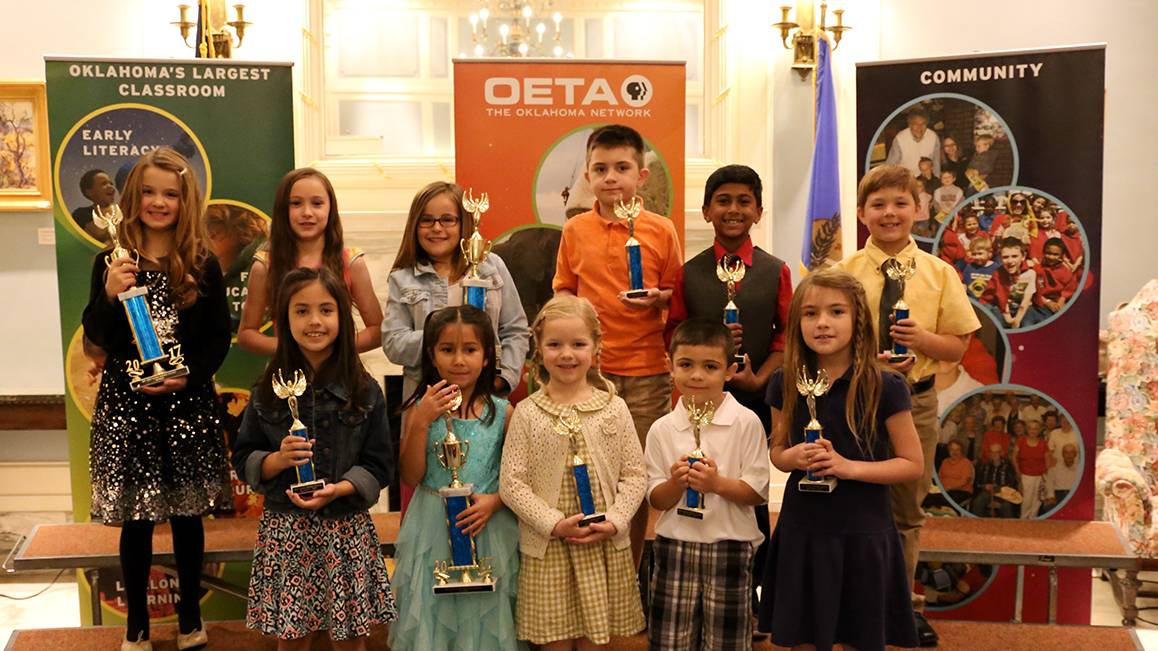 OETA is proud to announce the winners of its annual OETA Writers Contest. The awards ceremony took place earlier this week, Wednesday, May 24, in the Governor’s Blue Room at the capitol. Each winner, their families and their state representatives were invited to attend the awards ceremony as the children accepted their certificate, trophy, and prize package. OETA Interim Executive Director Mark Norman made brief remarks about the quality of the winning entries and the importance of early childhood education before awarding the prizes.

Earlier this year, OETA had an open call for submissions for stories from children in kindergarten through third grade. These twelve winners were recognized for their originality and creativity in their storytelling ability. It was not easy choosing these winners as there were over 200 submissions. The winners are:

Kindergarten
First Place: Citlali Ramirez-Neal from Oklahoma City
She wrote “Can I Go Swimming?,” which explores all of the fun things that you can do in each season even if you can’t go swimming.
Second Place: Mary Christine Kent from Edmond
Mary wrote “Show Me Something About Love,” a touching story that reveals all of the ways a girl’s parents show their love towards her.
Third Place: Victor James Morales from Lawton
Victor wrote “Alien Basketball,” a feel good story about a boy who teaches an alien from outer space how to play basketball.

First Grade
First Place: Emarie Sumner from Sand Springs
Emarie’s story "The Lost Dog," is a story about a girl that loses her dog and goes on a quest to find him.
Second Place: Libby smith from Oklahoma City
Chloey’s story "The Whisper," is a very clever story that shows if you pay close enough attention you can hear the whispers of nature and its many nuances. And to keep in mind three letters: S,H & L. Always remember to See, Hear and Listen.
Third Place: Avery McGee from Bixby
Avery wrote "Queen," a story about her amazing mom and two new editions to the family; her puppy Sarah and baby sister Jessie.

Second Grade
First Place: Annie Jo slater from Sapulpa
Annie wrote “The Great Escape,” it is a story about the misadventures of a guinea pig and his unlikely friends: a group of kittens trying to escape the horrors of domestication.
Second Place: Josie castor from Luther
Josie’s story “Nature,” is a poignant take on life in Luther, Oklahoma. Nature is at the forefront of this story.
Third Place: Emerson smith from Oklahoma City
Emerson’s story “The Mystery Solving Dog Fighting Cat Club,” follows Housecat as he embarks on a mission to bring back the golden fish.

Third Grade
First Place: Gracelyn Tucker from Oklahoma City
Gracelyn wrote "What’s that?," takes a unique approach to discuss the topic of Diabetes and nutritional practices.
Second Place: Joshua Joseph from Tulsa
Joshua’s wonderfully titled – and illustrated - story "Fancy Stick Man," follows the adventures of Stick Man as he searches for the microchip to save the planet.
Third Place: James van David Alstine from Edmond
James’ story "General Doodads 30 Years of War," the year is 2150 and the Robot Army of Overlord Feares has just built a factory to build more robots, cannons and machine guns to wipe out humanity but General Doodad has a thing or two up his sleeve.

The OETA Writers Contest is held by OETA’s educational department, a part of PBS' Ready to Learn program. Ready to Learn is a community engagement and outreach program designed to support the education of Oklahoma’s early learners. Leveraging OETA’s world-class children’s television programming like Curious George, SuperWhy and Cat in the Hat, the Ready to Learn program empowers teachers and caregivers with tools and training while maximizing every opportunity for learning in traditional and non-traditional learning environments.